Riding My Balls to Glory by Nathaniel Tower. 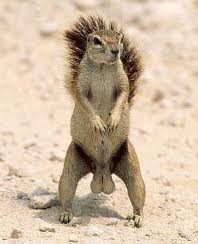 Last night I dreamt everyone could see my ball sack. It was just hanging out in all its sagging and wrinkled glory, a hair here and there scattered about to interrupt the view of raisined flesh. People pointed and I smiled. There was no shame. It’s not that my balls are beautiful. They're a little bigger than average, definitely disproportionate to my modest penis (which was still tucked away in the privacy of my undies). They're just like all the other balls in the world. They're weird looking, but people couldn't get enough of them. "Great balls," I heard the people say.
The craziest thing was that I was a school teacher—an elementary school teacher—and my balls were hanging out of my pleated trousers all day. No one seemed to mind, and I made no effort to conceal them. At the end of the day, the principal called me into her office and there was a famous author there offering me a bag full of cash to write my biography. I told him sure and took the cash without counting it, my balls dancing with joy.
When I woke up I decided to live out my dream the best I could. I started out small—I unzipped my pants, pulled out my sack, and walked around the house. It felt refreshing. When my wife saw it, she laughed and asked what the hell I was doing.
"I’m living the dream," I said with a sheepish smile.
"Can you live the dream with your balls in your pants?"
Then I told her all about the dream and about how I planned to keep my balls out from now on. "I think it could really advance my career," I added.
"I guess it's worth a shot," she told me. I could tell she doubted it, but we needed something to get us out of our rut.
I kept my balls out on the way to work, even in the drive thru at the coffee shop. The attendant didn't say anything, but I'm sure she noticed. There was a definite glance when she handed me my change.
In the office building I kept my briefcase in front of my exposed balls until I got to my desk. I had to ease into it, for the sake of the others. Besides, we had a staff meeting in the conference room scheduled for that morning, and I thought it would be best to reveal it to everyone at once. I didn't want any rumors about my balls circulating through the office.
I made sure I was the last to arrive to the meeting. I marched in and my balls flopped around. No one paid attention though. They were all staring at Beverly's exposed tits. They were glorious. I didn’t mind that she got the promotion I was after. She deserved it. I zipped up my balls and went back to the grind.

Nathaniel Tower writes fiction, teaches English, and manages the online lit magazine Bartleby Snopes. His short fiction has appeared in over 100 online and print magazines and has been nominated for the Pushcart Prize. His story "The Oaten Hands" was named one of 190 notable stories by storySouth's Million Writers Award in 2009. His first novel, A Reason To Kill, was released in July 2011 through MuseItUp Publishing. Visit him at www.bartlebysnopes.com/ntower.htm