Two Men Get Thrown Out Of A Bar by Rob Kitchin. 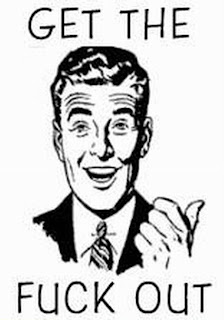 The two men looked up from the whiskies they’d been nursing and stared quizzically at the bartender.

‘The first rule of drinking in a bar - don’t make the guy serving your drinks the butt of a joke,’ the bartender said, polishing a glass.

‘Two men walk into a bar ...’  The bartender rolled his free hand, the towel twirling.

‘I thought that was a horse?  Or a giraffe,’ the second drinker said.

‘What the fuck would a giraffe or a horse be doing in a bar?’ the first drinker asked, losing his cool.

‘Taking part in a joke,’ his companion replied.

‘I’m not telling a joke!  Do you want to me to tell this feckin’ story or not?’

‘And the bartender is the straight man, not the butt of the joke,’ the second drinker continued.

‘I don’t care, bar jokes are banned,’ the bartender said.  ‘As are knock, knocks and doctor, doctors.’

‘Doctor, what?’ the first drinker said, his face a mask of confusion.  ‘Why would two men walk into a bar looking for a doctor?’

‘Then what have they got to do with my story?’

‘How the hell are we meant to know?’ the second drinker said.  ‘You haven’t told it yet.’

‘I haven’t been allowed to tell it!  It’s been ambushed by horses, giraffes and doctors!’

‘This isn’t going to be one of those shaggy dog stories, is it?’ the bartender asked.

‘Why would they have a shaggy dog?  To keep the horse and giraffe company?’ the first drinker said sarcastically.

‘Now you’re just being daft.  There’s no way a dog is going to hang out with a horse and giraffe.  Do you want a drink for a road before I lock up for the night?’

‘For the road?  Why would I give the road a drink?’

‘Hey, why did the chicken cross the road?’ the second drinker asked.

The two bewildered drinkers slid off their stools.

‘But I haven’t got to tell my story yet,’ the first drinker complained.

‘Probably just as well,’ said the second drinker, ‘I’ve heard it before.  And what they did to that penguin was a disgrace.’

‘OUT!’ the bartender roared.

Hiding out in Ireland, Rob Kitchin spends his spare time reading or writing crime fiction.  He blogs at http://theviewfromthebluehouse.blogspot.com/ where he publishes reviews and a weekly drabble (a story of exactly 100 words).  He's the author of two police procedural novels and had short stories published on Flash Fiction Offensive, Shotgun Honey, A Twist of Noir, Powder Burn Flash, and Spinetingler.

Email ThisBlogThis!Share to TwitterShare to FacebookShare to Pinterest
Labels: humour, Rob Kitchin, the laughter shack, Two Men Get Thrown Out Of A Bar

Rob - I like it! And I want to know what happened to the penguin...

Fun stuff. I too want to know what happens to that penguin.