The Wager by Michael A. Kechula. 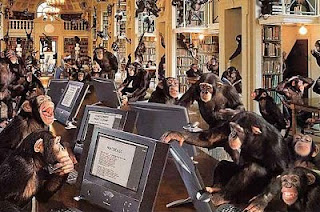 When the Queen of Zamboozia awarded Charlie Burns a jeweled trophy for winning the Faux Shakespeare Sonnet Writing Contest, I bet him ten million euros I could do better.
He thought I was nuts.
“I’ll even do it a year sooner. It’ll be so good, Shakespeare will think HE wrote it. But instead of putting fifty blindfolded, lobotomized people on typewriters like you did, I’ll use fifty blindfolded monkeys.”
Burns accepted the bet. The Queen agreed to be the judge and offered Knighthood to the winner.
I went to the Congo. Posted 785,235 recruiting posters in the jungle. 9,827 monkeys responded. After giving them personality and IQ tests, I selected fifty. Transporting them to London, I fed, clothed, housed them. Plus, I gave them weekly paychecks.
Soon, my blindfolded monkeys mounted typewriters and danced on the keys to hip-hop.
After three years of scrutinizing results, they seemed a million miles from producing a new Shakespearean sonnet. However, by cutting and pasting, I pieced together a poem Keats might’ve written in the third grade. It took first prize in Laughter Shack Magazine’s annual poetry contest.
As the deadline approached, I became anxious and drove the monkeys harder. For the thousandth time, I explained the stakes. Unfortunately, a labor organizer convinced them to go on strike for shorter hours and company-provided chocolate-covered bananas during smoke breaks.
We resolved the banana issue, but nothing else.
I explained management’s position on BBC.  After that news report flashed around the world, amazing things happened. Thousands of sympathetic monkeys found blindfolds and typewriters. They pounded them 24/7. I was flooded with tons of genuine, monkey-typed pages.
But none were sonnets.
On the final day of the bet, I spotted something in the mail that stunned me: a sonnet typed by a chimp from Kong Island. It was fantastic!
The Queen declared me winner, handed me Burns’ check for ten million, and knighted me.
While throngs of Zamboozians applauded, she said, “You were lucky, Sir Michael. You couldn’t do that again in a million years.”
“Your Highness, I can do even better. I’ll bet my monkeys can create a Harry Potter-like, 120-page novella within five years.”
“I’ll bet my crown you can’t,” she said.
“You’re on, Ma’am,” I replied, writing a check to match the crown’s value.
I won the crown and the novella became a best seller.

Email ThisBlogThis!Share to TwitterShare to FacebookShare to Pinterest
Labels: humour, michael a kechula, the laughter shack, the wager

Haha!! If only it was that easy!